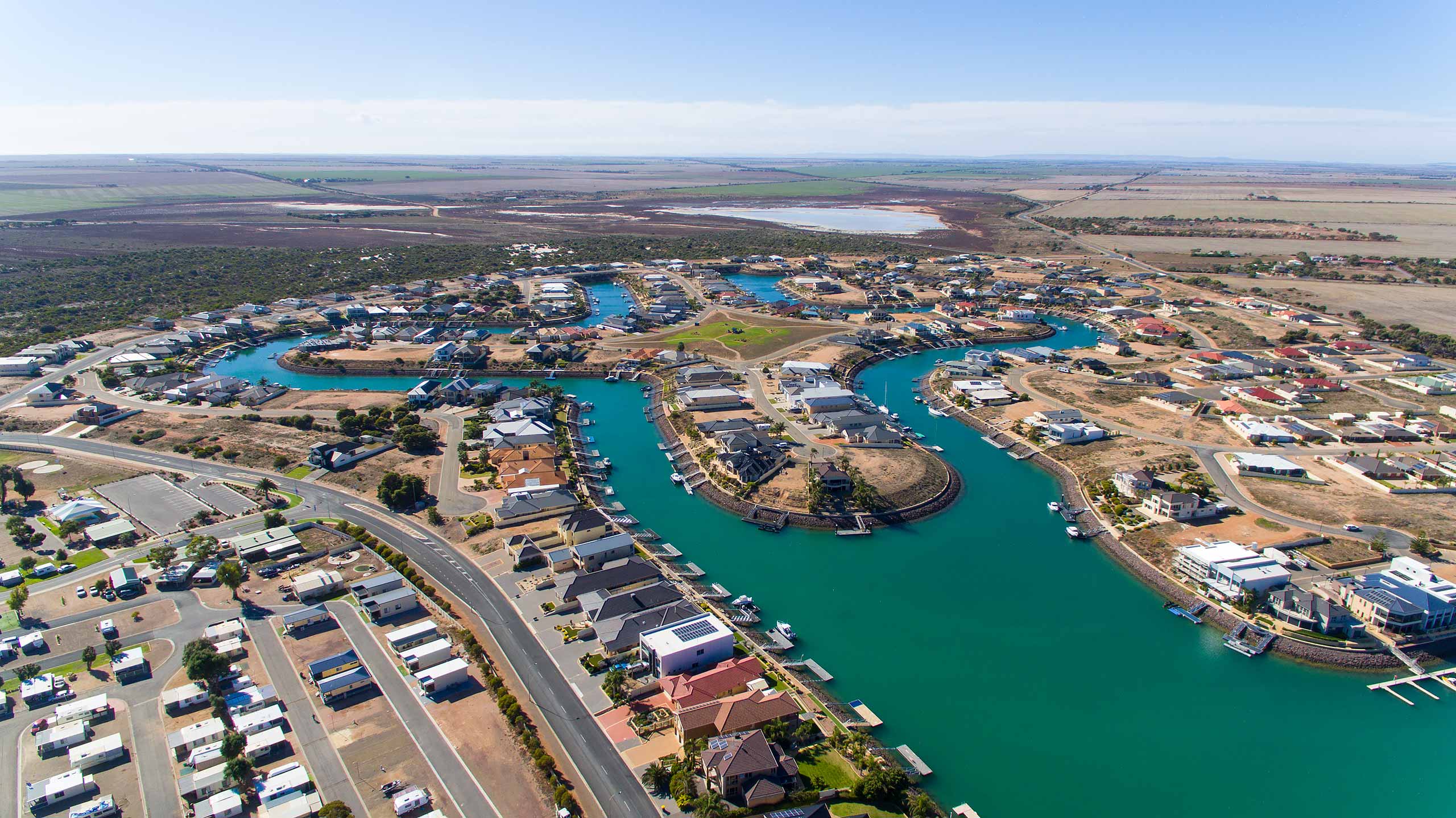 Wallaroo is a port town on the western side of Yorke Peninsula in South Australia, 160 kilometres north-northwest of Adelaide. It is one of the three Copper Triangle towns famed for their historic shared copper mining industry, and known together as "Little Cornwall", the other two being Kadina (about 8 kilometres to the east) and Moonta (about 18 kilometres south). At the 2006 census, Wallaroo had a population of 3,053.

The name "Wallaroo" comes from the Aboriginal word wadlu waru, meaning wallaby urine. The early settlers tried to copy the aboriginals by calling it Walla Waroo. However, they found this too big to stamp on the wool bales, so they shortened it to Wallaroo.

Since 1999, the rural broadacre farming area to the north of the town has been officially known as Wallaroo Plain The area south of Wallaroo is Warburto.  The Warburto railway station name was derived from the Narungga name for a nearby spring

Prior to European Settlement, Wallaroo was occupied by the indigenous Narungga people. During the early years of European settlement, the Narungga had a healthy population, but it has since dwindled. Matthew Flinders was the first European to visit the location. When he sailed by on 16 March 1802, he recorded that "the immediate coast ... which extends several leagues to the north of the point, is low and sandy, but a few miles back it rises to a level land of moderate elevation, and is not ill-clothed with small trees."

Wallaroo was first settled in 1851 by a sheep grazier, Robert Miller. In 1857, Walter Watson Hughes purchased the land and named it "Walla Waroo". The name was subsequently shortened to "Wallaroo".

Copper was discovered in the Kadina area in 1859, and in Moonta (in a wombat hole) in 1861. Confusingly, the famous Wallaroo Mines were at Kadina, not Wallaroo. There were no copper mines at Wallaroo itself. Wallaroo was a smelting and harbour town, not a mining town.

The copper smelter was established in 1861. It grew and developed to eventually become the largest copper smelter outside of Wales. In addition to copper, the smelter also produced gold and lead, and included a sulphuric acid works. By the early 20th century, profits were declining. Despite measures to improve productivity, the smelter became financially nonviable and closed in 1923.

Trading prospered, and a jetty was built in 1861 for ships to bring in coal, timber, food and mining equipment. The first load of refined copper was shipped in 1862, and by 1868 over 100 tons were produced each week. Distilled sulphuric acid was also produced and superphosphate was manufactured between the 1890s and 1920s.

Wallaroo was connected to Kadina by horse-drawn tramway in 1862 and to Moonta in 1866. A connection to Adelaide was completed by 1880. These railway yards expanded to a significant size, but the use of the line diminished and it was closed in the 1990s.

Today Wallaroo remains as a major grain port. An automatic grain loader was built on the town's third jetty in 1958 and is currently in use.

Wallaroo exists in a grain farming area with a moderate to low rainfall. It is located on the foreshore and is 13 metres above sea level. Wallaroo has a dry Mediterranean climate with seasonal temperatures a few degrees above Adelaide's temperatures. The temperature ranges are similar to those of Kadina and the weather patterns are similar to those of Kadina and Adelaide. In the summer Wallaroo has a light cool sea breeze on hot afternoons that sometimes makes the hottest afternoons more bearable than further inland.

Wallaroo's surrounds are used for growing barley, wheat and other crops such as legumes, canola, chickpeas and field peas.

Wallaroo is at the western end of the Copper Coast Highway and on the Spencer Highway. The railways to Moonta and Kadina closed in the 1990s. Grain is transported to the storage near the wharf by road, and loaded to ships by conveyor belts.

From the 1990s until 2009, the Lions Club of Yorke Peninsula Rail operated tourist services between Wallaroo, Kadina and Bute on some Sundays on the previously disused railway line.

A daily ferry runs between Wallaroo and Lucky Bay, near Cowell on Eyre Peninsula in the summer months. Available at: https://en.wikipedia.org/wiki/Wallaroo,_South_Australia accessed on 4/7/17

Rezare House is a modern building that offers hosted bed and breakfast accommodation in our home exclusively on the first floor, where our well-appointed air-conditioned guest facilities are located.